At its most basic, a shimmer reverb is a pitch-shifted reverb tail in a feedback loop. If you’ve listened to much U2 since the mid-80s, then you’ll have heard it. While it does work particularly well on guitars, it can also be used to great effect on other instruments. Brian Eno, who is generally credited with inventing the effect, had been using it on pianos long before it was popularised by U2’s Edge.

I built the shimmer effect in the Reason rack with an RV7000 Reverb and a Polar Dual Pitch Shifter. Hold down the shift key when you add these two devices to your rack though,  because we don't want to use the default routing here - we're going to do things a little differently. 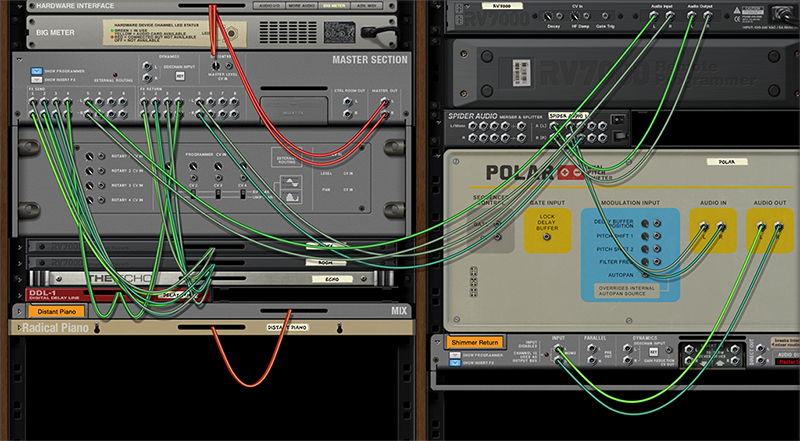 Now that we've got the routing sorted out, let's start dialling in some settings. You're going to want a pretty evident reverb. I've used the Arena algorithm, and selected the largest size available. Crank up the diffusion to make everything as fuzzy as possible. Turn the decay *nearly* all the way up, but not quite. Do not be overly concerned with subtlety here, people. Really: go big or go bigger. If you want to start with a preset, then the EFX Kick Bomb patch is as good a place as any. Add a little pre-delay to stagger the beginning of the reverb tail.

For the Pitch shift part of the sound, set both shifters to a shift of a single octave (by all means experiment with different intervals, but an interval of an octave is your safest bet). Play with the feedback level of and delay of each shifter to suit. Dial back on the delay and feedback if you find things are sounding a little seasick. I've detuned the second shifter, panned it to one side, and delayed it slightly.

Because you're adding higher frequencies to the signal, then it doesn't hurt to engage the Polar's LPF - you can select the frequency to match your material.

The final step is feeding the pitch shifted reverb tail back on itself. This shifts the reverb tail in pitch again and again, making for the characteristic sound of the effect.

Because you have the pitch shifted reverb tail in its own mixer channel, you can feed it back through the reverb by activating  the same FX return that is connected to the reverb inputs.

It's a good idea to lower the fader for this channel before you hit play! The channel fader can be used to blend the amount of pitch-shifted reverb against the normal reverb, and you can use the mixer channel's filters, EQ and compressor to control and reign in the signal and keep things under control

Here's the same piece without the shimmer effect:

Download the attached Reason song file and try it out! Try your own material through the shimmer effect. Try different intervals of pitch shift. What's important to bear in mind is that the material you’re running through the effect has space to breathe, allowing the sound to develop and flex. If your material is too dense, you're going to end up with some kind of sparkly celestial soup.