A clip is essentially a take. Everything you record in the Reason 4 sequencer will end up in a clip. A clip can contain different types of information; note events, device parameter automation, pattern automation, tempo automation etc. Personally, I like to picture a clip as a dynamic piece of transparent tape containing a short piece of music information. A selected clip in the Reason 4 sequencer is indicated by a black frame with handles on either side: 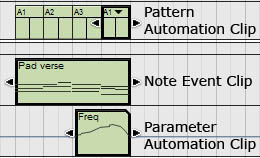 When recording, a note clip will always snap to the closest bar to make it easy to arrange afterwards. A clip is not fixed but can be modified in various ways; extended, shortened, joined with other clips etc. etc. Everything in a clip can also easily be modified by entering Edit Mode from the sequencer toolbar or by simply double-clicking the clip.

The reasons for choosing the clips concept are many but first and foremost to make for creativity and ease when creating and arranging music. Everything you record in the Reason 4 sequencer ends up in clips. This way you can rest assured that no information or data will be lost by mistake during editing and arrangement.

Too many clips on the lane?

Sometimes, if you do several overdubs on the same region of a lane, you could end up with a lot of small clips which eventually could be difficult to overview and to manage. If this happens, just select all clips in that region of the lane with the Arrow tool and choose Join from the Edit menu (or Ctrl [PC]/Option [Mac]+J). Now, everything will end up in just a single, easily manageable, clip.

If you want to draw note events using the Pencil tool it's important to remember that you have to do this in a clip. If there is no clip present in the lane you have to create one first. The nice thing is that you create a new clip with the Pencil tool as well. So, in Edit Mode, select the Pencil tool and draw the empty clip to cover the number of bars you like. Then, right after and without switching tool, begin to draw your notes in the clip.

If you decide to join clips that contain masked notes, be aware that any masked notes in the "joint section" will be deleted. The reason for this is that it's not possible to mask notes in the middle of a clip. And if you join two clips, the "joint section" will be in the middle of the new clip. However, a rule of thumb is that what you hear before joining clips is exactly what you're going to hear after joining.

The following is a basic example of how a recording process could evolve using the Reason 4 sequencer. Let's start from scratch with a new document.

By clicking the rightmost clip handle and dragging to the right we can now expand the patterns to cover as many bars as we like. By clicking the small pull-down triangle next to the pattern name in the clip we can easily change to another pattern without re-recording. We can also move the clips if we like.

We add some more bars manually with the Pencil tool until we have filled up 8 bars. Finally, we select Pattern A1 for the last two bars by clicking the pull-down triangle next to the pattern name.

Next, we create a bass instrument and record a 2-bar bass line. We resize the clip to exactly two bars with the rightmost handle before we copy and paste the clip to fill up all 8 bars. When you copy and paste a clip, the copy automatically ends up after the last clip on the lane - you don't have to manually define any insertion point.

Now, we want to mute the notes of bar 4 to get some variation in our bass line. We select the second clip and place the cursor on the right handle and drag to the left across the last notes. The notes will still be there, only you won't hear them since they are now masked. If we change your minds later on we'll just expand the clip to make the masked notes sound again.

If you know you're never going to use these notes again you could permanently delete them by selecting the clip and choosing Crop Events to Clips from the Edit menu. This command will delete all masked events in a clip.

Now, let's move on to the melody line. We create a new instrument and choose a nice piano-ish sound. We record in a single clip throughout the entire 8 bars and then stop the sequencer. We're not entirely happy with the result but most parts of the melody line sounds OK so we'll keep it. We want to record an alternative take to see if we could nail it this time. We click the New Alt button on the transport bar to automatically create a new lane and mute the previous lane.

We record the second take on the new lane and stop the sequencer. Now, we want to record an alternative ending of the verse. Again we click the New Alt button to create a third lane and mute the other two. We place the ruler at bar 7 and record the last two bars.

We use the Razor tool to cut up the three clips in smaller "good" and "bad" clips. Then we mute the bad clips using the Mute Clips command on the Edit menu (or by pressing M on the computer keyboard) to verify that the melody sounds the way we want. We also click the M buttons to un-mute lanes 1 and 2 to be able to hear the clips on all three lanes.

The good parts turned out to be bar 1, 2, 5 and 6 on lane 1, bar 3 and 4 on lane 2 and bar 7 and 8 on lane 3. Now, let's merge all the clips on the three note lanes to one single lane. Select Merge Note Lanes on Tracks from the Edit menu and the clips end up on a single lane. The muted clips are automatically deleted after the merging.

We now have the backbone of our song; the drums, bass and melody. Let's add a pad so the melody has something to "float" on. We create a new instrument and choose an "airy" pad sound. We record the pad chords in a single 8-bar clip. In bar 3 we accidentally hit the wrong notes. We enter Edit Mode by selecting the clip and pressing the Enter key (new in V4.0.1). We correct the wrong notes and exit to Arrange Mode by pressing the Esc key (new in V4.0.1).

Let's introduce a slow filter sweep to the chord in bar 5. We place the song position marker at bar 5 and hit Rec. A new clip is automatically created on the note lane since the sequencer doesn't know what data we're going to record yet. When we start changing the Filter Frequency parameter on the SubTractor device, the parameter automatically ends up in a new clip on a separate parameter lane and we can see the value changes appear as a grey line in the new clip.

As soon as we record a parameter change in the sequencer, the parameter has been automated. By automated we mean that this particular parameter will always have defined values throughout the entire song - also before and after the actual clip.

The first Filter Frequency parameter value in the clip is called the static value. The static value, indicated by a blue line, is the value to which the parameter will default to when outside the clip. The static value will follow the parameter until any new changes of the Filter Frequency parameter are recorded anywhere in the song - before or after the clip. This way, you'll never have to bother about any "send controllers" command at the beginning of your song - or any "chase controllers" functionality. Everything is automatically and neatly set up for total recall functionality - wherever you are in your song.

When we're finished with the verse, we'll continue with the chorus, bridge, intro and anything else we want to put in our song. We'll build up the other parts the same way we did with the verse; clip by clip, lane by lane and track by track, until we're happy with the result. To make it easier to visually identify the different parts, we rename and color the clips by selecting them and choosing Add Labels To Clips and Clip Color from the Edit menu. We also choose to join the separate clips on the Bass and Pad note lanes respectively to keep down the number of clips per lane and make it easier to manage. We copy and paste our verse so that we now have an intro, two verses, a bridge and a chorus. 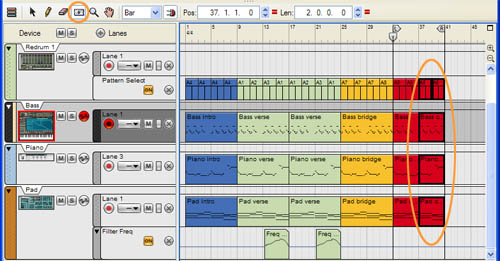 Then, we switch to the Arrow tool and press the Ctrl [PC]/Option [Mac] key and drag away two copies of selected clips to the end of the song.

We continue to build up our song until we have a rough complete arrangement. Finally, we'll do some fine adjustments and editing in the different clips to complete our song.