“A one-man passion project for the love of experimental music and electronic sounds”—that’s the description on Ekssperimental Sounds’ Facebook page. We met up with that one man to chat about what drives and inspires a creator of Rack Extensions. Here’s Erik Söderberg of Ekssperimental Sounds.

— The thing that got me into creating Rack Extension instruments and devices was actually the legendary “big knob” on King Tubby’s mixing console. He used it to sweep the reverbs and echoes in his dub mixes; it was kind of his secret weapon. I researched what that knob actually did because I wanted to have it as a plug-in. So that is what inspired my HighPass Filter 1012.

The person talking is Erik Söderberg, an impressively bearded 37-year old who’s the man behind Ekssperimental Sounds. Just like Reason Studios, Erik is based in Stockholm, Sweden.

Looking at Ekssperimental Sounds devices and their beautiful GUIs, it comes as no surprise that Erik’s background is in graphic design. Erik has done graphic work for other plugin developers as well. For example, he made the GUIs for several McDSP plugins, such as the EC-300 Echo Collection and a redesign for their lunchbox style Ultimate Modular Collection plugin 6060 plus some modules for that product as well.

But Erik’s primary interest is music and sounds. The Ekssperimental Sounds brand name stems from Erik’s initials (EKSS). He used that moniker as an artist alias for his dub music releases and decided to stick with it when he started making Rack Extensions. Unsurprisingly, Erik’s studio is filled with synths and other electronic instruments.
— My personal favorites are probably the DinSync RE303 and THC Syncussion SY-1, clones of classic instruments that I built myself from DIY kits. Syncussion was designed to make drum sounds, but you can make so many odd noises with it. I also really like Digitakt and Digitone from Elektron. And of course, the Yamaha CS01 and Roland SH-101 which inspired my ES01 and ES101 Rack Extensions.

It turns out that Erik does not have a background in coding.
— You can get quite far with making Rack Extensions anyway, and I have people around me who can help me out if necessary. It’s pretty easy to get started with making Rack Extensions. I’d suggest anyone who’s interested in giving it a try to start by checking out Reason’s SDK, building the example projects, and starting with a simple product. Create something with one knob and make it work. I had no idea how to do it; I just got started and solved the problems as I went along.

The creation of a new device starts with pen and paper, outlining functions and features.
— There’s a lot of going back and forth between Photoshop, coding, and testing. The graphic work comes in at a pretty early stage.

Erik has been a Reason user from day one.
— I started making music in the late 1990s, and when Reason came out in 2000, I immediately fell in love with it. I’ve never really bothered working with any of the other DAWs. I love Reason because it is so easy to use and works like hardware units with all the patch cords. To this day, I still mostly use Redrum for beats. And Thor is just great. I haven’t worked a lot with Europa, though. The music I make is pretty retro oriented, and I think Europa maybe sounds a bit too modern for those projects.

So what does Erik think is the future of instruments and effects?
— Hm, not sure for how long this will go on, but the current trend seems to be a lot about going back to dedicated hardware units. But I’m probably the wrong person to ask because what I do is more about recreating great stuff from yesteryear with a modern twist. I guess I look more backward than forward!

If you want to hear some of that music, here’s a Soundcloud link to a playlist with various projects Erik has released.

Erik also shared his Reason template with these devices and settings on the master bus.
— All settings are neutral but it helps a lot for a quick and easy mastering. 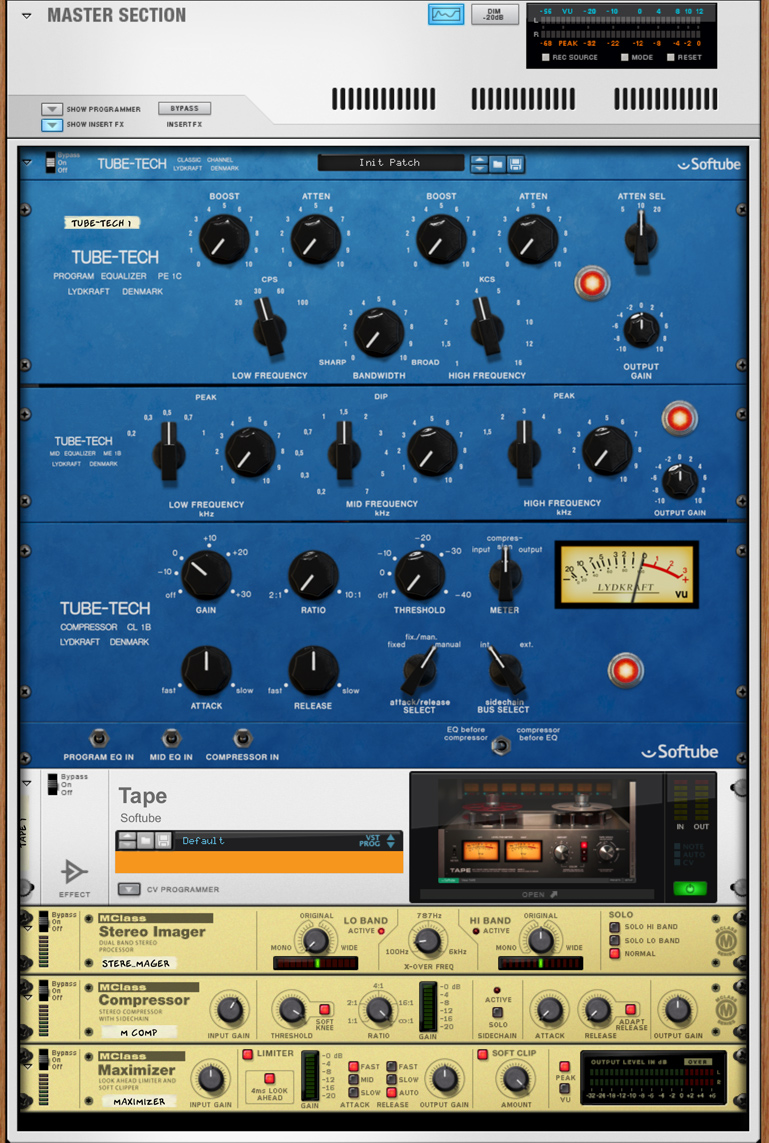