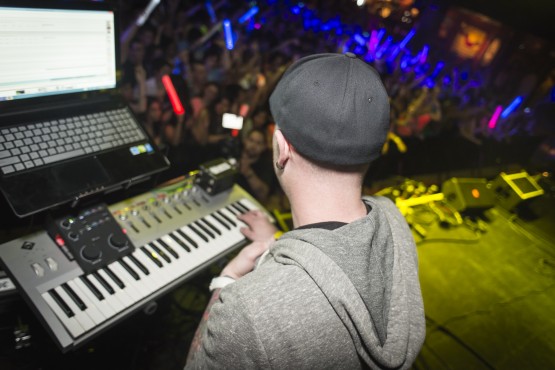 NU.F.O. stands for Newly Formed Objective and that objective for Boston residents Moses and EP1C is to combine their past experience creating music across nearly all styles and genres into a whole new electronic animal. If you listen to their catalog of releases, you’ll find it filled with House, Drum & Bass and Electro beats with vocals at the forefront, sung by both of NU.F.O.’s members: Moses & EP1C. Their vocal style has roots in Hip Hop, Pop, Rock and even R&B with lyrics that are both thoughtful and thought provoking.

How do you use Reason in your music making?
All of our music is written, produced, mixed and mastered in Reason. The software promotes a creative workflow through its intuitive interface and hands-on feel. In comparison to other DAW's, we have found that production in Reason just feels more organic, resulting in sounds and songs that stand out. Our identifiable sound wouldn't be possible without it.

You work a lot with vocals in your tracks, any tips for vocal production?
We produce a rough version of each track to serve as a canvas for writing the vocals. Once we track them, we re-approach the song to make sure everything works together in the best way possible. Reason's tools and Rack Extensions make it easier to treat vocals more like a sequenced instrument that can be edited and effected in the same impressive ways.

How does your live set-up look?
Coming from a band background, when we first set out to do this project we wanted to make sure that our live show had some form of musical performance beyond what is typically expected of EDM artists. We perform parts of each song using MIDI keyboards and controllers in addition to dual live vocals. We accomplish this by running Reason on laptops with Balance interfaces. We use our actual studio project files and remove the parts that we play live. We also control our own vocal mix by running the mics into the Balance interfaces, through Reason. The best thing about doing it this way is that all of the vocal fx, routing and automation we used in the studio version are retained and reproduced in real-time on our live vocals.

Do you have any favorite sound or patch?
It's too hard to name just one since we try to use different sounds as often as possible. In general, though, our go-to synth is Thor; especially when you run it into an Etch Red with some drive gain.

What has been the best moment in your music making career thus far?
The best moments we experience are those where we're on stage performing something we've worked tirelessly to create and know that in that moment we're connected with the audience in a way that is unlike anything else. It's incredibly powerful and will never get old for us.

Any words of wisdom for aspiring producers and musicians?
Art doesn't have to follow rules. We believe you shouldn't be bound by the limitations of genres, styles, formulas or expectations. Write music that you want to hear, not what you think someone else wants to. In the end, your opinion is the only one that really matters.