Acclaimed Reason synths, instruments, Players and effects now available for any DAW, including Apple Logic in the latest version, Reason 11.1

STOCKHOLM, Sweden – November 22nd 2019 - Following closely on the heels of the recent launch of Reason 11, simultaneous with the announcement of Propellerhead Software becoming Reason Studios, the company announced today that Reason 11 is now available to an even broader host of DAW users – including Apple Logic owners – with the addition of AU support in version Reason 11.1. The announcement further underscores the significance of the launch of Reason 11, bringing the major update to Reason Studios’ flagship music-making software to a wider global audience of music creators.

Reason 11.1, also now compatible with macOS Catalina, can be used as a standalone DAW or a plugin, offering immense value at affordable prices across the three available versions that offer entry-to-advanced combinations of Reason Studio’s legendary synths, instruments and effects. The Reason Rack Plugin, integral to all versions of Reason 11, brings the quality of renowned Reason Studios instruments and effects to any DAW. Flexibility in sound design and routing is further facilitated by access to the exclusive Rack Extension add-on market for yet more creative options.

“With Reason 11 we wanted to make sure anyone could harness the power of the Reason Rack in a way that works for them: as a self-contained environment or a super-powered plugin.” said Mattias Häggström Gerdt, Product Manager. “The release of Reason Rack Plugin as an AU is the next step on this journey, opening the doors for users of Logic Pro X and many other hosts on macOS. Now more musicians than ever can join the multitude who already love using Reason to make music.”

Reason 11.1 is available now via the newly released Reason Studios website and authorized resellers worldwide. The software, which includes additional improvements and bug fixes, is also available for free download by registered Reason 11 users and at upgrade prices to owners of previous Reason versions. 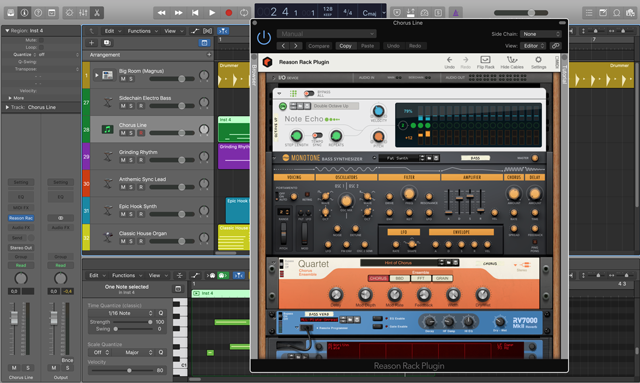 Reason Studios announced today that Reason 11 now supports AU, opening it to use with DAWs such as Apple Logic.