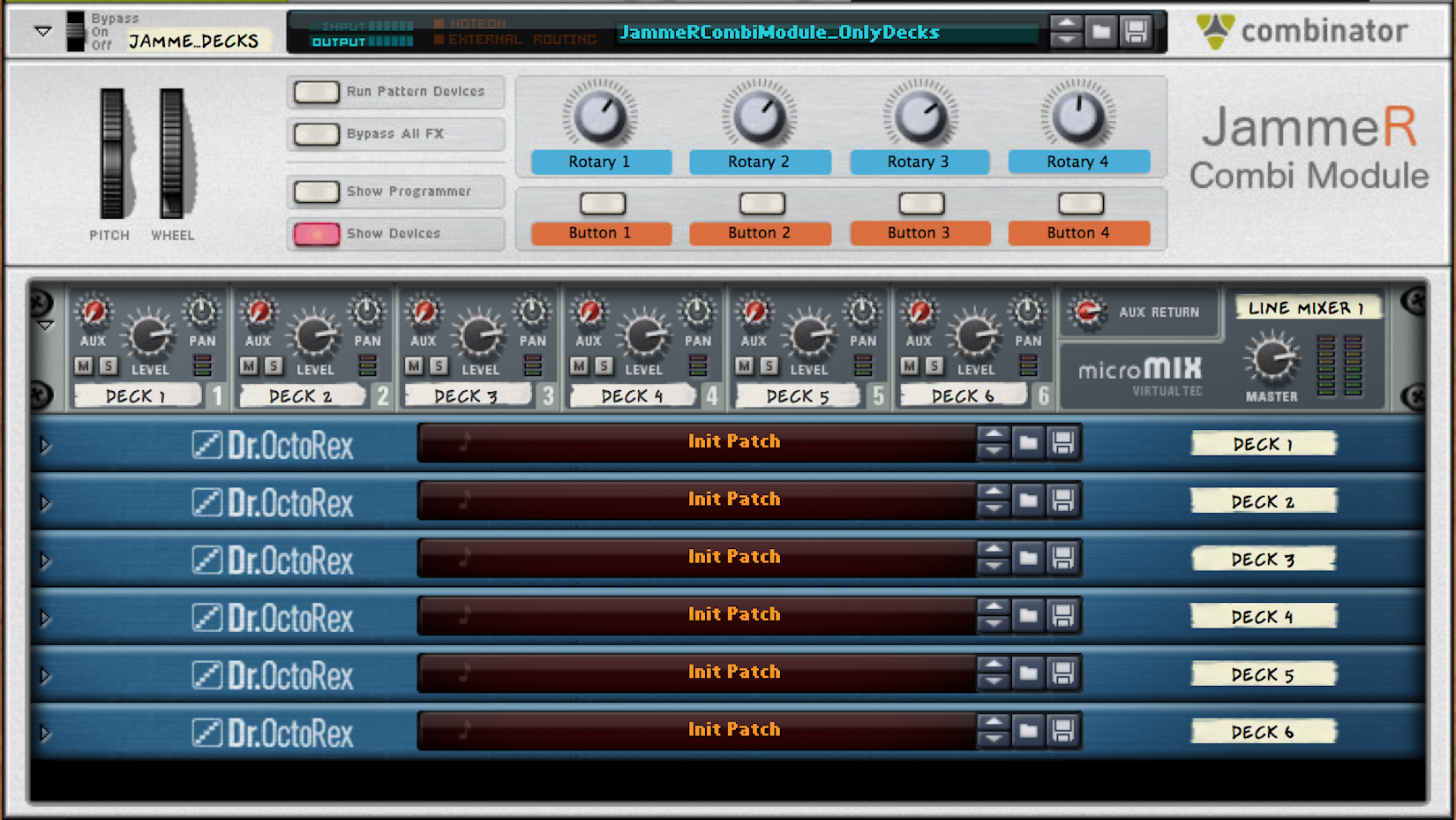 JammeR Loops Trigger Module is a utility rack extension which allows you to program and trigger scenes of loops from multiple Dr.Octorex players, also known as “decks”. A scene can be composed of any combination of loops from each of the decks. Scenes can be triggered by pressing the trigger buttons with the mouse, by MIDI notes, or by note and gate CV. Each device can have up to 8 scenes and simultaneously trigger up to 6 decks. Both the number of scenes and decks can be extended with some wiring (patches included).

JammeR is the ideal companion for jamming with rex loops both in the studio and on stage!

The JammeR interface is comprised of an 8 by 6 matrix of selectable loop slots. Each slot in a row represents a loop in one of the six Dr.Octorex devices loaded in the “JammeR Combi Module”. For each Dr.Octorex device, also known as a “deck”, you select which loop to trigger. A scene is composed by selecting a loop for each deck. You can create up to 8 scenes in a single instance of JammeR.

If “Alt” is pressed on the computer keyboard while clicking in the scene trigger area, the scene edit menu opens offering the options to copy and paste scenes, reset or fill all the slots in a scene with a given selection, alter or randomize the selections. The scene edit menu greatly speeds up the process of composing scenes.

Once scenes have been created, they can be triggered in several ways

In addition to triggering entire scenes, it is also possible to trigger single loops directly from the matrix interface by pressing “Shift” on the keyboard and then clicking on a loop slot. Loops are triggered according to the quantization settings of each Dr.Octorex device (bar, 1/16, or beat).

Each deck and scene comes with a tape strip for labeling purposes. The device supports patches so that you can store your loop selections and labels for future use.

Both scenes and single slot triggers can be recorded in the Reason sequencer and most parameters can be controlled from an external MIDI controller via Remote. Available for download are ready-made remote files for popular grid controllers like the Novation Launchpad series, Ableton Push, Maschine Jam and the Akai APC Mini.