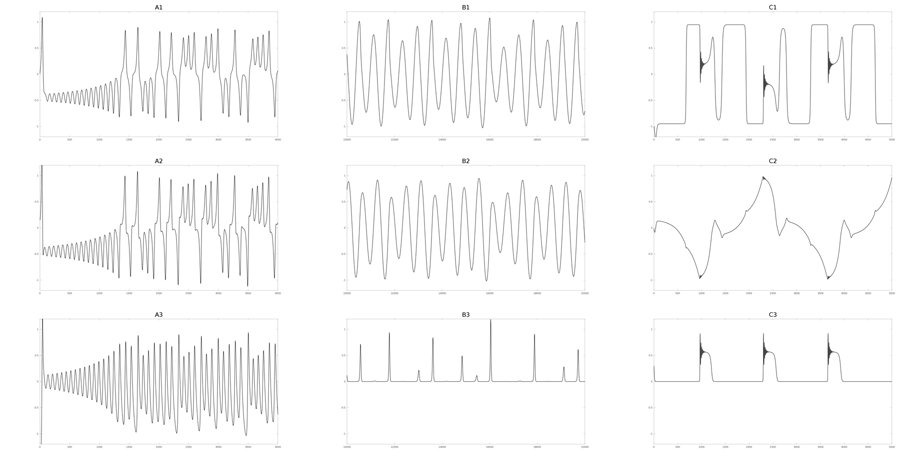 BZR-1 is a creative utility device that outputs chaotic CV signals. The signals are predictable in the sense that they exhibit recognizable patterns that repeat over time, but they are also stochastic in the sense that it is impossible to predict the exact values that they will assume over time.

BZR-1 contains nine different configurable signals that allow you to modulate and trigger other Reason devices in a multitude of weird and chaotic ways!

BZR-1 runs three chaotic dynamic systems in parallel, A, B, and C. Each of these systems has three output signals, 1, 2, and 3. The graphs in the image above show typical behaviors of the nine signals. Each of the three systems is initialized with three values (one for each output signal). The systems will generate different outputs depending on how you set the initialization values, but in general they will exhibit patterns similar to the ones you see in the graphs.

BZR-1 has a row of lamps (OUTPUT) on the right of the panel that shows you the output CV signal .

The TYPE knob is used to select which of the nine chaotic signals to output. All three systems runs in parallel regardless of how this knob is set.

The three INITIALIZATION knobs are used to set the start point for the three chaotic systems. Since the output signal is chaotic, it is impossible to predict the exact behavior of the systems for a given set of initialization values – turning one of the knobs ever so slightly can have a large impact on the output signals! However, the sequence of CV values for a given set of initialization values is always the same, so if you set the initialization knobs to a configuration that you have used before BZR-1 will output the same values as it did that time.

Flipping the RETRIG switch will retrigger the three systems with the current initialization values.

The AMP knob controls the amplitude of the output CV signal.

The OFFSET knob shifts the output signal towards -1 or towards +1.

The SPEED knob controls the rate of change of the output signal.

The back panel has a UNIPOLAR/BIPOLAR switch that allows you to select whether the output signal is in the range 0 to 1 or -1 to 1, as well as CV modulation inputs for the AMP, OFFSET, and SPEED parameters.

Version 1.0.1 fixes two bugs that could freeze or crash Reason.