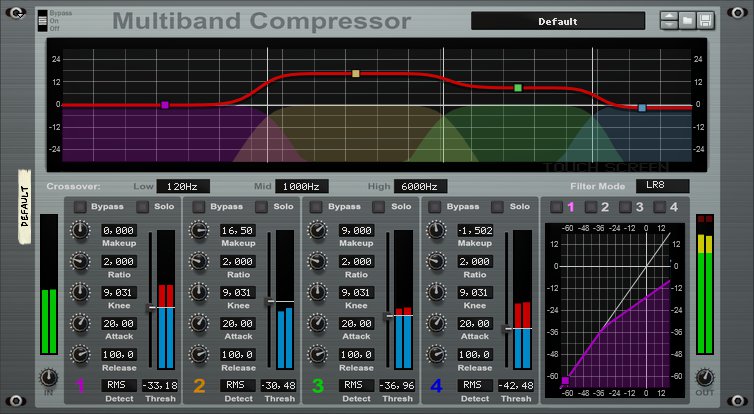 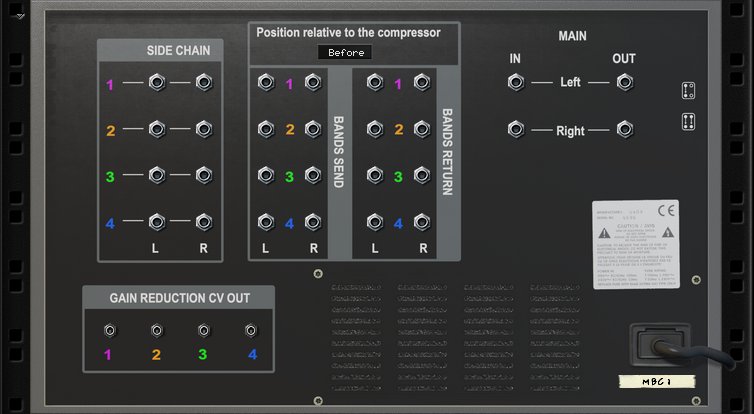 Compression is one of the most commonly used methods of processing audio in the modern recording, mixing and mastering. This helps to improve the intelligibility of vocals, tame overly aggressive snare drum, and limit the dynamic range through the mix so that the listener does not have to continue to adjust the volume on the playback system.

The front panel has the compressor section,
crossover section, and the big graphic display.

THE GRAPHIC DISPLAY has the ability to control:

THE COMPRESSOR SECTION
Each of the four bands has:

RMS detection, a mathematical means of determining average signal levels. The implications of using a compressor with an RMS detection are that the compression will sound natural, but short duration, high amplitude sounds may pass through at a higher level than you expect.

Peak mode, the gain control responds more accurately to brief signal peaks than in the RMS ‘averaging’ mode. This ensures peaks are more accurately controlled, but at the same time introduces a greater risk that the broadband audio will be squashed unacceptably whenever a loud, short transient sound occurs. For this reason, it may be most effective to use Peak compression when treating individual drum and percussion sounds prior to mixing.

LR4 Fourth order Linkwitz–Riley crossover, are probably today’s most commonly used type of audio crossover. They are constructed by cascading two 2nd-order Butterworth filters. Their steepness is 24 dB/octave (80 dB/decade). The phase difference amounts to 360°, i.e. the two drives appear in phase, albeit with a full period time delay for the low-pass section.