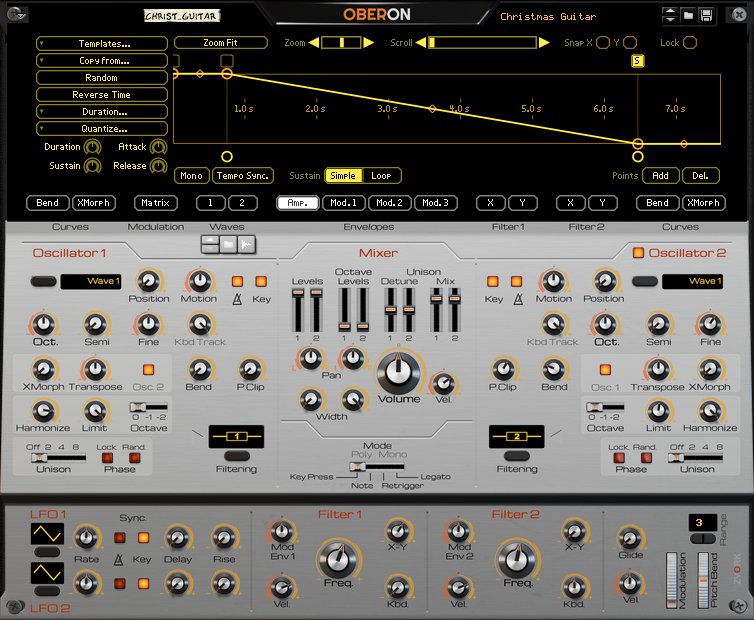 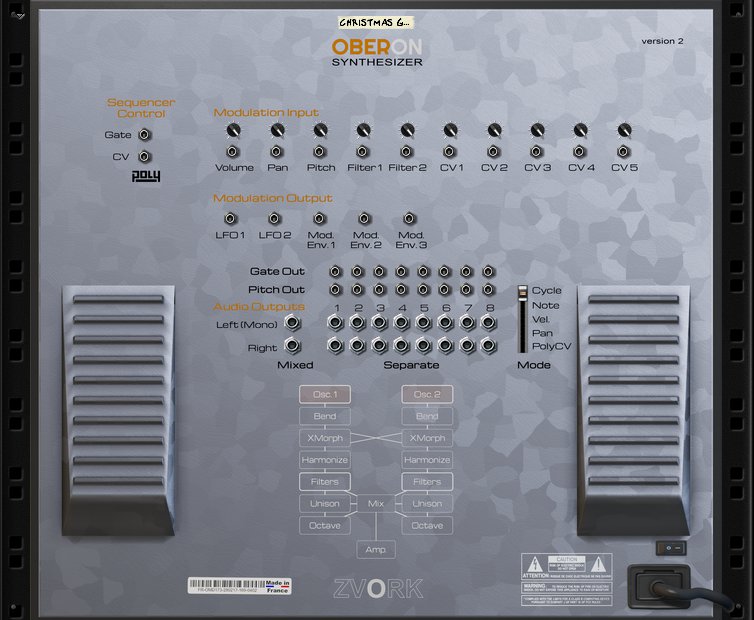 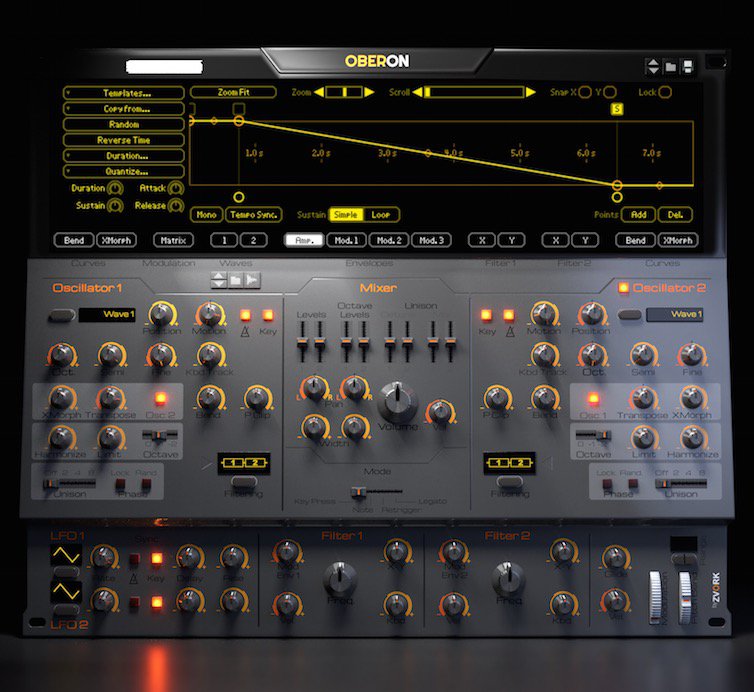 Oberon is a synthesizer built to explore and produce the fattest of sounds with uncompromised audio quality. Based under the hood on an optimized additive engine, it delivers totally alias free audio with a familiar user interface while giving you incredible control on your sound.
With its interactive central display, edit your envelopes, waves, filters and more through multi-point curves.

Oberon is also available in a bundle with Noxious and LeSpace.

Version 2 of Oberon is only available to Reason 9.2+ users.

The Oberon synthesizer has two oscillator sections and two filters. Each oscillator can be fed to one of the two filters or to both, in serial or parallel mode. These filters enable you to alter the timbre of your sound but are not the only mean to do so.
Each oscillator can generate a number of different waves, from simple sawtooth and square to more complex metallic or robotic sounds. Each of these waves is in reality a wave sequence that can be played at different speeds.

This major update adds new features such as sample loading, wave modifiers, LFO rise and delay parameters, but also GUI enhancements and 100+ new patches. Please note that this update is only available for Reason 9.2+ owners.

All the above could seem very classic if it wasn’t for these following features.

Each of Oberon’s four envelopes are defined by a user editable curve, with up to 16 points. These envelopes are furthermore loop-able, with editable loop section and a tempo synchronization option.

Import any audio samples supported by Reason into one of the user waves. Use these analyzed samples as any built-in wave sequence.

In Oberon, the filters don’t have predefined modes such as low pass, high pass or comb. Instead you define the filter response yourself, again with an editable curve. Each filter response can morph between two curves for even more dramatic and changing effects.

This special feature lets you smoothly morph between two sound sources, potentially of different pitches and timbre. Morph between a pitch downed version of the same oscillator or between oscillator 1 and oscillator 2 for original transitions. The morphing effect can also be masked for certain portions of the spectrum if, for instance, you want to apply the character of one sound source solely to the high frequencies.

To fatten your sounds, each oscillator can be virtually duplicated up to 8 times with a pitch detune. After that, if this isn’t enough, another virtual copy of the resulting sound can be added to your final sound mix at an octave higher. As the term “virtual copy” coins, all this is extremely efficient on your CPU.

If you are in need of metallic inharmonic sounds, this is the functionality you need. With it you can quickly bend your sound to mimic highly rigid strings, bells or quirky buzzes, in a predictable way.

On the back panel you will find 8 separate outputs for both stereo audio and CV gate, with complete PolyCV and PolyModular compatibility. Individual voices can be distributed among these outputs.

Oberon comes with over 450 patches in all categories.