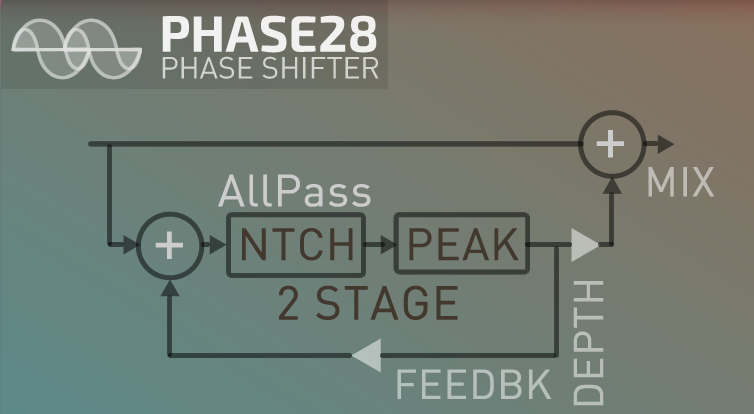 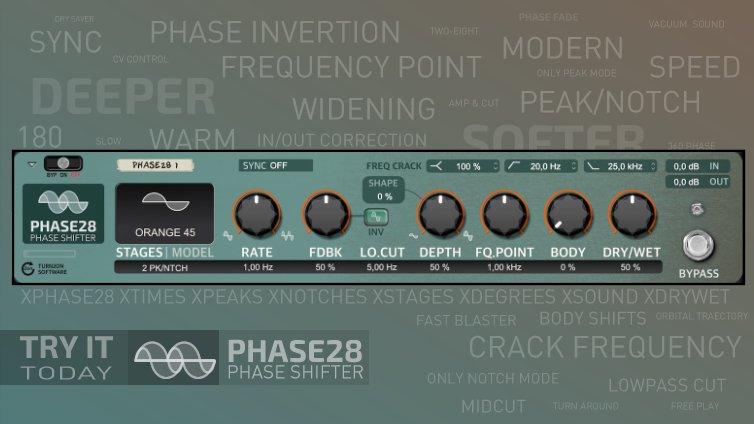 Introducing PHASE28, a new phase shifter effect.
The Stages selector gives you control of how many stages from 2 to 8. Use 4 for a classic 4-stage phaser, or 2 stages for subtle shimmer effects. You can increase the stages to 6 or 8 stages for new creative experiments.
Stage models based on the famous orange phaser pedals and legendary phaser - “stone” pedal.

Do you want high fidelity with shimmering and subtle underwater type tones, or to experiment with 6 or 8 stages?

“PHASE-TWO-EIGHT” - in name of device included range of phaser stages you can choose.

Basic phasers have at least two all-pass filters to create one notch and one peak for a 2-pole effect that creates 2 stages. Increasing the number of stages creates a stronger, more complex sound.

The output can be fed back to the input for a more intense effect, creating resonance
by emphasizing frequencies between notches. This involves feeding the output of the all-pass filter chain back to the input. At high settings, the effect will become highly resonant, similar to a WahWah effect. FEEDBACK can be inverted, creating another variant of the effect.
FEEDBACK can be Inverted. Inverted signal is feedback into the effect, creating another variant of the effect.

While Guitar pedal effects are usually mono, a stereo phaser applies the effect to left and right stereo inputs, or to a duplicated mono input, using two independent chains of all-pass filters. The two chains of filters are often modulated 180 degrees out of phase. This makes the left channel’s notches and peaks sweep up while the right channel sweeps down, and vice versa, creating a richer phaser and a wider stereo image. On the PHASE28 this can be adjusted with the BODY parameter.