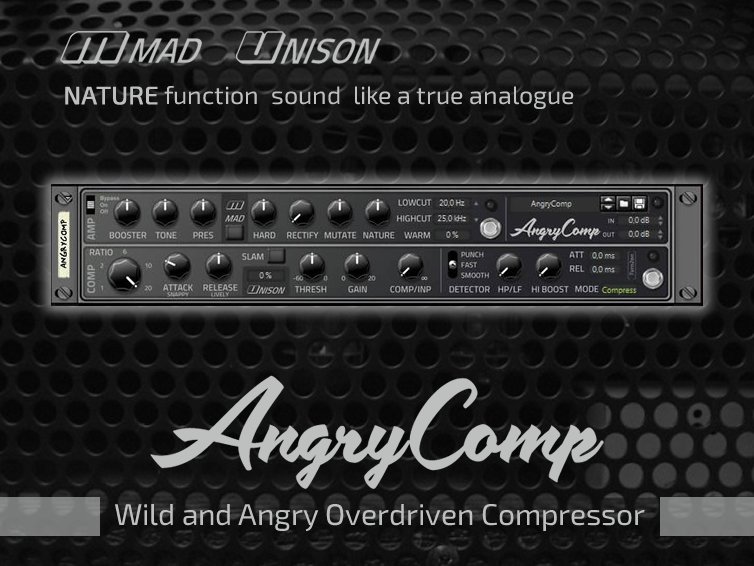 Introducing a new overdrive effect with a nice range of destruction colors. It is not just an Overdrive, but a much more complex hybrid effect for any kind of sounds.
An Overdriven signal can sound even more interesting if it uses a compressor. These days you can find a few interesting solutions with the use of guitar effects pedals. Many people find this effect very useful to destroy the signal, correcting it in a few ways, and then compressing it. ANGRYCOMP can be easily used to change the sound of a piano, pad, or other similar sound sources into a very hard sound, like a distorted guitar.

The AMP section includes complex solutions to break up your signal.
The unique MADNESS function changes the color of the sound. The Mutate knob adds distortion to the booster. The Nature knob makes the signal sounds like a real analogue and is useful with any kind of incoming instruments/samples.
The second section is the Compressor, which can work as a punchy compressor, but also has a Sidechain Mode. Sidechaining can help you to create new rhythmic lines of instrument by using other rhythmic tracks in the project as a sidechain source.
The Compressor also includes a configurable Envelope Detector section to create rules for how curves can change the sound. Unison Spectre (c) helps to create an absolutely amazing and wide sound at the device output.

This is a creative effect that overdrives your signal, modifies the structure and color of the sound, and compresses it, totally changing it to something new.
In Reason, you can create your own alternatives to this effect device by routing other overdrive and compressor units together, but it will not have same result..
ANGRYCOMP is an original and unique complex solution for building new sounds out of the box.

Examples of use Detector:
- For an average rather than peak response, set ATT and REL to the same value around 20ms.
- For additional release smoothing and shaping, leave ATT at zero and increase REL

If you connect a full drumline to the Sidechain input, your synth line will repeat its rhythms as dropouts.